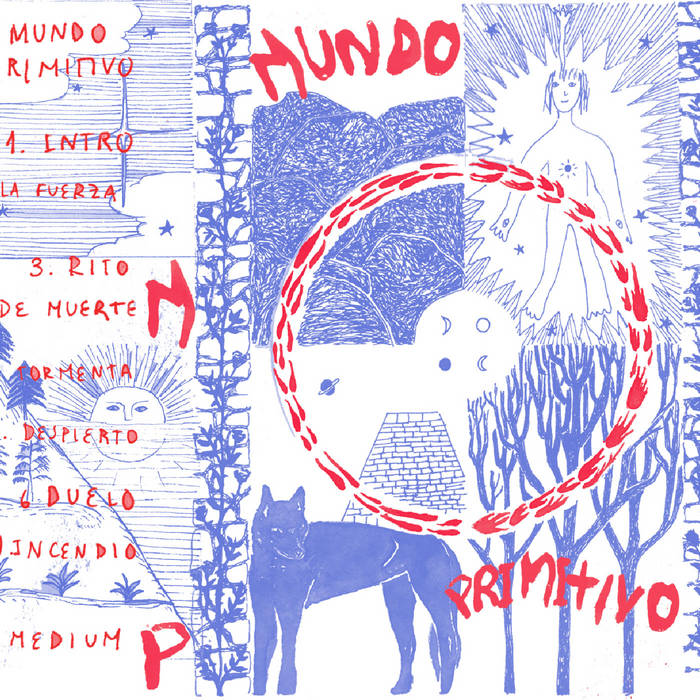 shaun24 There aren’t many bands/records that have an immediate impact on me but this is one of them.. keep on keeping on people 🙌❤️

A statement from Mundo Primitivo:

Please take the time to read our statement and understand some of what has led to the ongoing strike.

Colombia is in crisis, its people are resisting a violent right-wing government, increasing social inequities and decades of institutionalised corruption. Colombians exist in a world controlled by violence where political and social activists are murdered on average every two days.

The current situation is the symptom of crimes that date back to illegal paramilitary groups that have been operating since the 1980’s. These groups are funded by the drug trade, deeply involved with drug cartels, and allied with landowners and powerful political figures. They were formed to combat the left-wing guerrilla groups LAS FARC, who obstructed the unlawful seizure of land and resources. As both guerrilla and paramilitary groups grew, rural communities were often caught in the crossfire.

Coinciding with this is Colombia’s long history of exploitation for its natural resources for profit, mainly by multinationals from the United States. Many communities, and the land they occupied, were seen as nothing but an obstacle. Land disputes resulted in widespread displacement of millions of Colombians, the invasion of indigenous lands, massacres and the murder of many journalists and environmentalists who dared to speak out. Those involved, both directly and through corruption, hold powerful political and governmental positions to this day. Colombia is in the hands of criminals.

Alvaro Uribe Velez was elected president in 2002, with a history linked to the financial sector, paramilitary and the drug cartels, in the 90’s. His presidency oversaw one of the biggest genocides in Latin America at the end of the 20th century with 6,400 victims reported in the Falsos Positivos scandal.

He went on to form the ultra-right-wing Centro Democratico (Democratic Centre) party, which has maintained power ever since. Currently 90% of congressional elections are bought through the sale of votes and billions of pesos are regularly spent, by political parties and their allies, to secure political elections. These are just some examples of the deep-seated corruption by those who control the country.

On April 28th, 2021, many Colombians mobilised against the brutal tax hike proposed by President Ivan Duque. Thousands of people across all capitals, small cities and demonstrated in the streets, with indigenous and rural peoples travelling to cities to join the protest. The tax proposal would have raised the price of essential items such as food by 19%, disproportionately affecting the middle and lower classes. Whilst the reform claimed to ease economic recession caused by the pandemic, the government has spent billions of pesos unnecessarily on the president's PR campaign, military aircrafts, police tanks and more. Currently, 45% of the Colombian population live in poverty, exacerbated by 14 months of the pandemic. Duque retracted the reform on May 2nd, only to replace it with several other reforms including plans to privatize healthcare and other public services. Protesters continue to fight against an unfair and corrupt system, violence grows daily and almost half of the country faces poverty.

President Ivan Duque has utilized the military to suppress protesters. The ESMAD (Mobile Anti-Disturbances Squadron) and the army have used excessive violence against protesters. Police have been seen illegally hiding their identification numbers, covering license plates and using live ammunition against civilians. According to reports, at the time of writing police have been responsible for; 39 deaths, 2110 cases of police brutality, 16 cases of sexual assault of woman and underage girls, 133 cases of gun misuse and 1055 arrests. Colombia is calling for the international community to become informed and denounce the violation of Human Rights.

Today Colombians are uniting like never before, through protest, collectives and NGOs. They are full of hope that they can break free from the violent history of their country. We stand with the Colombian people in support of basic human rights and their freedom to survive.

All proceeds from this release are being directly donated to aid those who are currently struggling against fascist violence in Colombia.

As Australia gets a head start with the first green shoots of post-(?)pandemic punk, MUNDO PRIMITIVO set it off with some vertigo-inducing bar-setting on this sensational eight track tape. Melissa (of Colombia’s ABUSO) touches down in Sydney and starts this band. It sounds like you getting moshed right out of the fire escape of a Bowls Club in Wollongong and head first into the window of an anarchist squat in Bogotá. And back again!

It’s hardcore, so the inventive riff buffet on offer here tastes a bit like Oli’s previous shred stint in another hands-across-the-Pacific supergroup MORTE LENTA, but the immediacy here is straight outta the New South Wales basement multiverse, which figures as bass is held down by Allie of PHOTOGENIC and MUM infamy, while roiling tom stomps could only be worthy of esteemed local corelord Señor Coyle of ILL BRIGADE. As cocktails go… it’s a strong one, so order a tray for your mates then throw them at a cop.

‘Paisaje Interior’ takes a defiant lyrical stance, asking us who will we decide to be after what we have been through? This is a bold decree to hold ourselves together in grief and rage, to stay very much alive in spite of the best efforts of so many evil forces. “Hoy quiero vivir y gritar la verdad!” If this tape had to be compared to a four band bill we’d book OLHO SECO for mood, LOOK BACK AND LAUGH for speed, SIAL for vibe and …CHAIN OF STRENGTH for cruciality. El Mundo contains multitudes though so there’s even a propulsive RAKTA-esque haunting to close things out.

This wicked fusion dish is a timely reminder of the explosive musical friendships that punks of every stripe cannot help but build whenever we discover each other in the same space or a new place. If that thought alone brings a tear to your bleary eyes, then here’s one to blast as the community puts its arms around our Colombian siblings. (Bryony Beynon)